There’s No Reason to Freak Out About FREAK SHOW 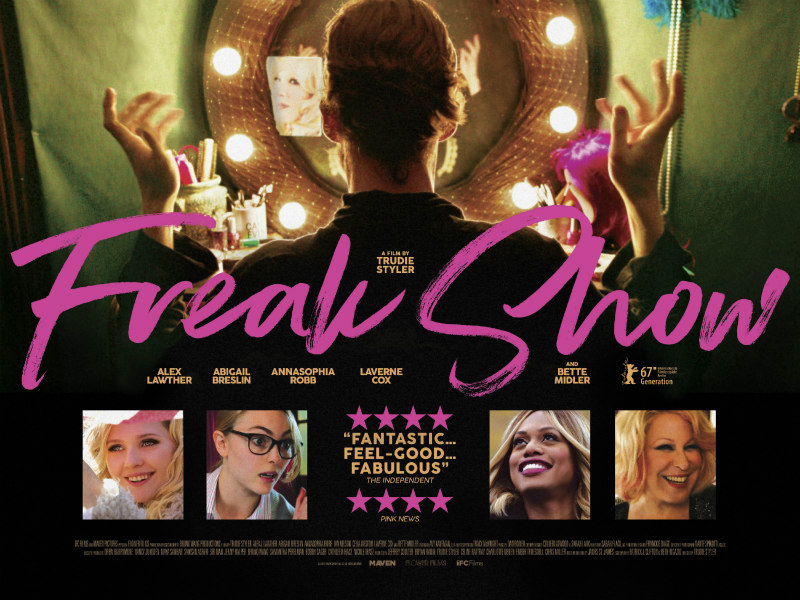 Billy (Lawther) is alone. His mother has disappeared. He lives with a father he can’t connect with. He is starting at a school that doesn’t respect his openly gay and proud attitudes. We are Billy’s only companions through his tumultuous term at an incredibly conservative Texan high school, where he shakes things up not only with his outfits, but his attitude.

It is a shame to find, that like most of the characters in the film, Billy’s attitude is incredibly one note. He cares for fashion, glitz and glamour and rarely do we get more insight than that. When he is bullied by other kids at school, he retaliates with more flamboyancy and quotes from Oscar Wilde. This is a fine way to act (lord knows The RomCom Guy has been guilty of it), but it always feels like a front, the real Billy is hard to find.

Billy is surrounded by stock characters; the Christian cheerleader (Breslin), the jock who wants to give up sports for art (a weak Ian Nelson), the bully who is hiding his own sexuality (Christopher Dylan White). Nothing about them feels original or rings true. Even Bette Midler (who is always a delight to have on screen) as Billy’s alcoholic mother feels like she’s been ripped from thousands of movies before this one. That’s not to say there aren’t performance behind these stock characters, Alex Lawther does his best with. Billy and there are nice moments from most of the ensemble.

Trudie Styler’s direction is more style than substance, which fits Billy to a tee, but makes everything else feel messy. The film picks up in the final act when Billy announces his candidacy for homecoming queen. Suddenly we feel a real direction and voice begin to stir, but alas, it’s too little too late and all it really boils down to is a speech that tells us that we’re all freaks (which was better when it when Cady Heron was breaking up a crown into a million pieces at the spring fling).

THE ROMCOM GUY VERDICT
While Freak Show isn’t a bad movie, it feels misjudged and its characters are painfully one note which makes the 90 minute runtime feel like and eternity. We may all be freaks, but there are more interesting ways to display that on screen.

Freak Show is in cinemas now and available on demand.